statMed.org is designed to help students of medicine to learn about differential diagnosis.

It is NOT a clinical decision support tool and should NOT be used to guide decisions about clinical practice.

It is NOT a symptom checker.

If you are concerned about a medical problem you should immediately seek medical assistance from a doctor.

statMed.org and it's affiliates, officers and employees shall not be held liable in anyway responsible for any direct or indirect consquences resulting from the use of the website.

Please enter at least one feature (symptom, sign or investigation result) before performing the calculation.


For example, if chest pain and low oxygen saturations were present, but haemoptysis was absent, the features section should look as follows:

To add a feature that is present, start typing and then click the green arrow.


To add the absence of a feature (i.e. a 'negative' finding), start typing then click the red cross.


If you want to remove a feature from the list simply click the grey cross in the box to the right of the feature.

Pulmonary embolism (PE) is a condition in which one or more emboli, usually arising from a thrombus formed in the veins, are obstruct the pulmonary arteries, causing respiratory dysfunction.

We know from experience that few patients (around 10%) present with the medical student textbook triad of pleuritic chest pain, dyspnoea and haemoptysis. Pulmonary embolism can be difficult to diagnose as it can present with virtually any cardiorespiratory symptom/sign depending on its location and size.

The PIOPED study1 in 2007 looked at the frequency of different symptoms and signs in patients who were diagnosed with pulmonary embolism.

The relative frequency of common clinical signs is shown below:

It is interesting to note that the Well's criteria for diagnosing a PE use tachycardia rather than tachypnoea.

NICE updated their guidelines on the investigation and management of venous thromboembolism (VTE) in 2020. One of the key changes was the use of the pulmonary embolism rule-out criteria (the PERC rule) 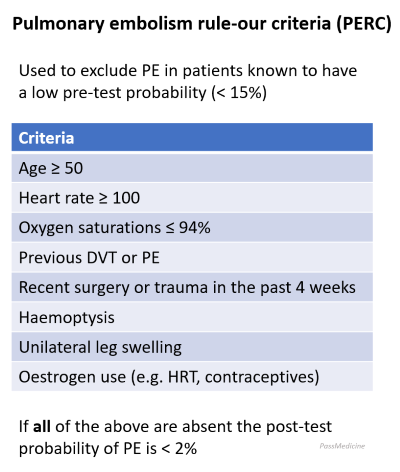 If a PE is suspected a 2-level PE Wells score should be performed: 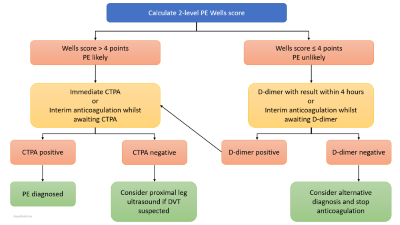 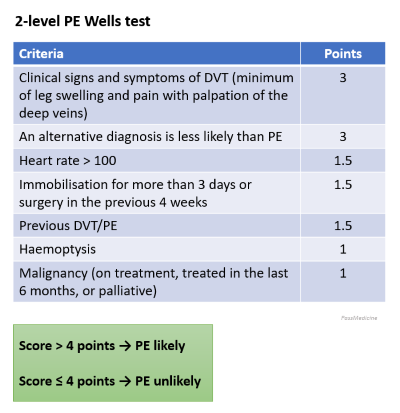 The consensus view from the British Thoracic Society and NICE guidelines is as follows: 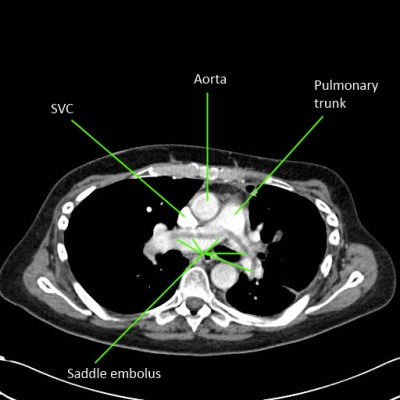 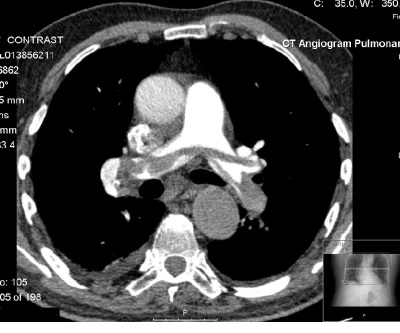 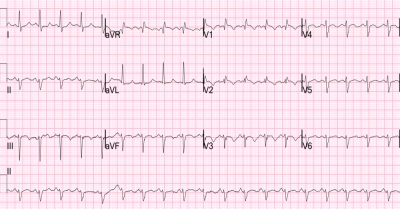 All patients with symptoms or signs suggestive of a PE should have a history taken, examination performed and a chest x-ray to exclude other pathology.

If a PE is still suspected a two-level PE Wells score should be performed:

If a PE is 'likely' (more than 4 points) arrange an immediate computed tomography pulmonary angiogram (CTPA). If there is a delay in getting the CTPA then give low-molecular-weight heparin until the scan is performed.

If a PE is 'unlikely' (4 points or less) arranged a D-dimer test. If this is positive arrange an immediate computed tomography pulmonary angiogram (CTPA). If there is a delay in getting the CTPA then give low-molecular-weight heparin until the scan is performed.

If the patient has an allergy to contrast media or renal impairment a V/Q scan should be used instead of a CTPA.

NICE updated their guidelines on the management of venous thromboembolism (VTE) in 2020. Some of the key changes include recommending the following:

Deep vein thrombosis has for a long time been treated on an outpatient condition. In contrast, patients with any form of PE were typically admitted. However, in recent years patients with a new diagnosis of PE who are deemed low-risk are now increasingly managed as outpatients. NICE formally supported this approach in their latest guidance.

The cornerstone of VTE management is anticoagulant therapy. This was historically done with warfarin, often preceded by heparin until the INR was stable. However, the development of DOACs, and an evidence base supporting their efficacy, has changed modern management.

Patients who have repeat pulmonary embolisms, despite adequate anticoagulation, may be considered for inferior vena cava (IVC) filters. These work by stopping clots formed in the deep veins of the leg from moving to the pulmonary arteries. IVC filter use is currently supported by NICE but other studies suggest a weak evidence base - please see the link for more details.